In the war in Ukraine, Russia used weapons that are classified as “poisonous” under international law. The ecological effects of these toxic substances will last for decades and affect the health of people around Europe.

Russia’s War in Ukraine Could Have Environmental Impact That Lasts Decades. The environmental costs of Russia’s invasion of Ukraine will last for decades, according to a study by the University of Oklahoma and the Ukrainian Institute for Policy Analysis. 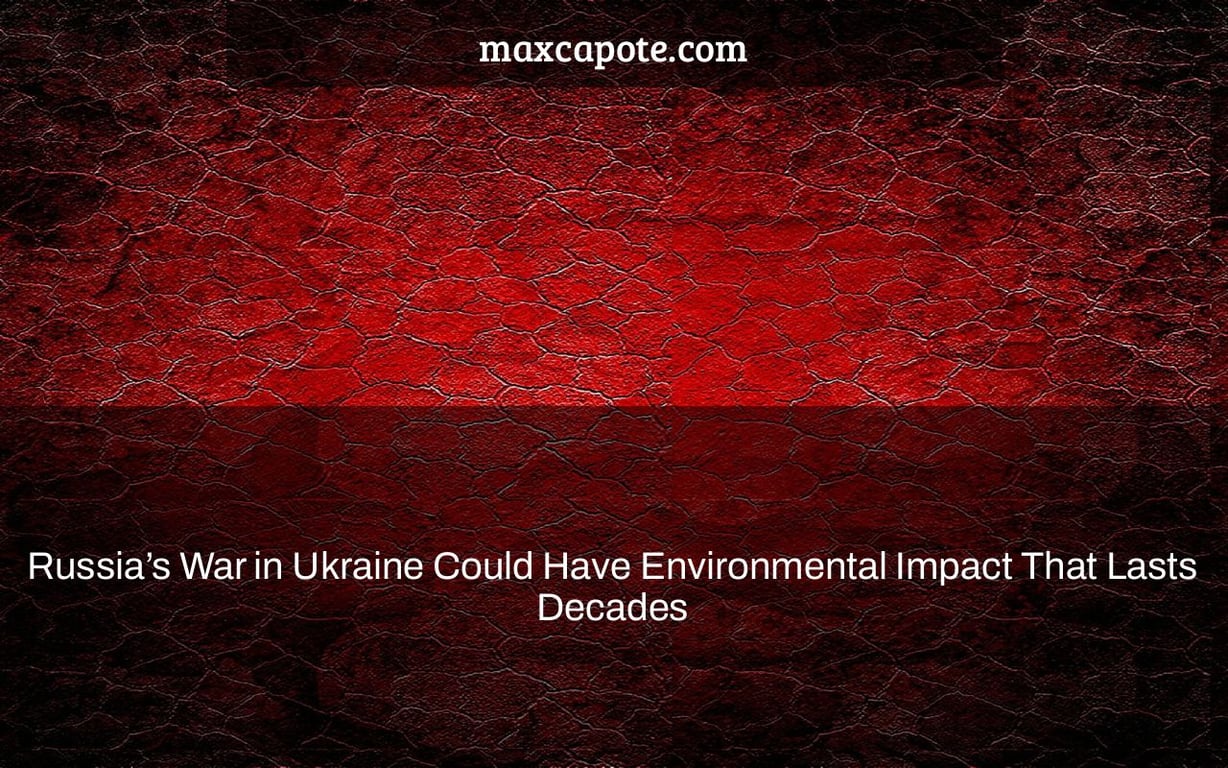 The conflict in Ukraine is contaminating the country’s air, water, and soil, according to environmental health experts, who believe the chemicals unleashed by the ongoing assault might take years to clean up, increasing the risk of cancer, respiratory illnesses, and developmental delays in children.

Experts are worried about the health impacts of exposure to heavy metals, as well as poisonous fumes and particles from explosions, fires, and building collapses, in addition to the conflict’s devastating toll of thousands of lives killed. According to experts, the possible health effects might extend beyond Ukraine’s borders, since contaminants are transferred downwind and downstream.

According to Iryna Stavchuk, Ukraine’s deputy minister of environmental protection and natural resources, some 100 inspectors working for the Ukrainian government are sampling soil and water at locations of concern. Inspectors don’t have access to many parts of the nation, making it impossible to determine the entire scope of environmental damage, she added.

Nongovernmental groups such as PAX, a Dutch NGO that recorded pollution in Syria and other war zones, the Conflict and Environment Observatory, a UK charity, and Ecoaction, a Ukraine-based environmental organisation, are also identifying contamination locations. The groups have each documented damage at more than 100 sites, ranging from power plants to military installations and water-treatment plants, by combing through eyewitness posts on social media and messaging platforms such as Telegram and cross-referencing them with satellite images and Google Earth maps.

It might take years to clear up the pollutants generated by the ongoing attack. This month’s destruction in Zhytomyr, Ukraine.

According to Evgenia Zasiadko, director of Ecoaction’s climate section, several hazardous areas have been located near the cities of Kyiv, Luhansk, and Kharkiv.

As combat in the country’s east increases, a highly industrialized corridor with chemical plants, coal mines, and refineries might be targeted.

Damage to the region’s coal mines might contaminate the groundwater that tiny towns depend on for drinking water. “If military actions occur there, there is a significant danger for local residents as well as longer-term environmental repercussions,” Ms. Stavchuk added.

In other regions of Ukraine, public-health specialists raised alarm over the discharge of heavy metals such as lead and cadmium into the air and drinking water from industrial facilities, which have been associated to developmental abnormalities in children. According to Barry Levy, an associate professor of public health at Tufts University School of Medicine and an expert on the impacts of war on public health, “it’s impossible to quantify the exposure” to environmental contaminants “in the thick of a battle.”

LET US KNOW WHAT YOU’RE CONCERNED ABOUT.

What efforts should be made to protect the environment during a war? Participate in the discussion below.

According to a 2019 assessment by the Organization for Security and Cooperation in Europe, hundreds of massive reservoirs throughout Ukraine hold nearly 6 billion tons of liquid waste from mining and industrial operations. If the reservoirs are destroyed, the poisonous chemicals might pour over neighboring land or waterways.

According to Wim Zwijnenburg, project head of PAX’s initiative to monitor environmental damage sites in Ukraine, the violence has destroyed more than a dozen water infrastructure, including water treatment plants and dams. Untreated wastewater has washed into rivers and streams due to damage to water treatment facilities.

According to Neta Crawford, a political science professor at Boston University and co-director of Brown University’s Costs of War Project, air pollution is another big worry. Emissions from tanks, military planes, and vehicles may equal to “as much as a small or medium-sized nation in a full year,” she warned, depending on how long the battle lasts.

Aftermath of a mid-April attack on a plant in Kramatorsk, Ukraine. Pollutants have also been produced as a result of attacks on power facilities and water treatment plants.

Large flames and the emission of pollutants including as soot, methane, and carbon dioxide have resulted from Russian raids on gasoline storage and refineries throughout Ukraine.

Previous conflicts imply that these emissions might have far-reaching consequences. Iraqi forces, for example, set fire to hundreds of oil wells in Kuwait in the early 1990s, which burned for months. According to air monitoring at the time, burning oil accounted for 2% of world carbon dioxide emissions that year, about equal to all of Canada’s emissions. Years later, ice core samples from Tibetan glaciers revealed that the soot had been blown hundreds of kilometres by the wind, covering the glaciers.

Observations on the News

Keep up with key events in Ukraine, as well as today’s headlines, news in context, and recommended reading, sent daily to your email.

According to Philip Landrigan, director of Boston College’s Global Public Health Program and Global Pollution Observatory, cement dust discharged into the air by disintegrating structures presents a concern to inhabitants and rescue personnel in areas targeted by Russian strikes.

Dr. Landrigan, who led major studies of first responders who combed the rubble of the World Trade Center towers after the Sept. 11, 2001 terrorist attacks, said the fine particles are highly alkaline and can irritate the airways and cause scarring in the lungs when breathed in. Inhaling the dust, he compared to “inhaling a fine powder of Drano.”

Construction-related asbestos is another urban danger that may persist for years due to the mineral’s inability to breakdown or wash away in rains. Asbestos has been associated to a variety of malignancies, including long-term consequences. Airborne asbestos, according to Dr. Landrigan, “gets down into the lungs and then it’s like a time bomb.”

According to Mr. Zwijnenburg of PAX, environmental harm is typically overlooked during warfare but should be continuously monitored. “It’s not simply about rescuing trees and growing flowers when it comes to the environment,” he remarked. “It’s really basic to people because if it becomes polluted, they won’t be able to live there.”

Nidhi Subbaraman can be reached at [email protected]

How to fix the ‘Couldn’t preview file’ error?